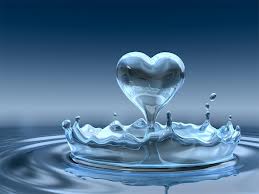 Most everyone knows that drinking water is healthy.  Now I’m going to ask you to actually do it.  This week your simple but permanent change is to drink at least 3 liters (about 13 cups) of calorie free fluid per day if you are male and 2.2 liters (about 9 cups) if you are female.  While this is in line with the Institute of Medicine’s recommendations for fluid intake, it is still controversial if we actually NEED that much fluid.  However, drinking that much can help ward off hunger.  Often times our body mistakes thirst for hunger, so being well hydrated is key to managing our calorie intake.   It is also good to aim high in case we fall short for the day.  Being dehydrated can cause headaches, lightheadedness and nausea.   Staying hydrated is also important by aiding our liver and kidneys to detoxify our bodies.  If drinking 2-3 liters per day of straight water is too boring for you try mixing in some of these other calorie-free beverages.

If you are like most people that think in order to control your weight you need to cut out pasta, then week 3 of, 52 Weeks, 52 Ways to a New You, is sure to be a pastarrific surprise! 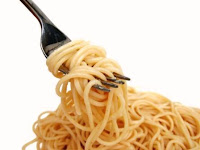 Add Spaghetti Squash to Your Spaghetti

Since this blog is all about simple changes that are easy to make, rather than ask you to cut out pasta, (which I would consider hard for most people to do) I am only going to ask you to dilute it with vegetables.  Next time you make spaghetti, rather than pile your plate high with pasta, portion out only 1/2 the spaghetti you would normally eat, then make up the other half with spaghetti squash.
If you have never had spaghetti squash you are in for a treat.  It has a mild flavor and when cooked right an Al dente texture.  Not only does it taste great, but it will cut your calorie and carbohydrate intake way down.     By replacing 1 cup of spaghetti with 1 cup of spaghetti squash you will save about 180 calories.  Remember, 100 calorie deficit per day will equal a 10 pound weight loss in 1 year.  This switch could mean big results.
Ok, so it tastes good and it cuts calories but to make it even better it is easy to prepare.   I just pop it in the microwave while I’m boiling my pasta and cooking my sauce. 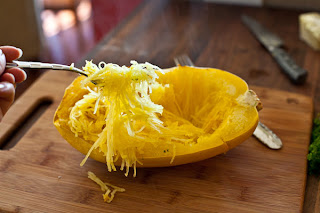 After washing the outside of the spaghetti squash pierce it with a knife in about 5 different places.  Then microwave it on high for about 10-12 minutes, rotating and turning the squash 3 times during cooking, or until it gives when pressed on.  Allow to sit for at least 5 minutes.  Cut in half and scoop out the seeds with a spoon.   Run a fork along the inside from end to end and the pieces will come out in spaghetti like strands.

Cut spaghetti squash in half lengthwise.  Scoop out the seeds with a spoon.  Cook on a baking sheet, cut side down, at 375 degrees for about 30-45 minutes or until the outside gives when pressed on. Allow to cook just long enough to be able to handle the squash.  Run a fork along the inside from end to end and the pieces will come out in spaghetti like strands.
Since I’m only asking you to make 1 small change this week I’m not even going to go any further and discuss what you should put on top the spaghetti; sauce, meats, cheese, etc.  Just proceed as you normally would.  However, don’t take the cut in calories as a license to eat more garlic bread.  Small permanent changes equal big results!

Yup, that’s it!  I’m not going to tell you specifics of what to pack, I’m just going to tell you to pack your lunch.  With this small change, a healthy weight is in the bag.  Your lunch bag that is.  With all the fat, calories, sodium, and food additives packed into fast food and restaurant food this small change in your diet is sure to help you be healthier.  Packing your lunch will help you avoid making a quick run to McDonalds® where a quarter pounder with cheese and a medium fry has 900 calories, 45 gm of fat, and a whopping 1370 mg of sodium, no drink included.  Even if you are at home all day, having a prepacked lunch is a great idea.  When we get hungry it is harder for us to make healthy food choices.  If your lunch is already packed then the choice is made before you get hungry.   If I haven’t convinced you to pack your lunch yet, how about this?  It is likely to save you money.  When you eat out for lunch you will most likely spend $5-$10, a price that’s easy to beat with a home packed lunch.  Here are some tips to help make it happen:
1) Pack your lunch the night before to ensure that it is done.  No excuses in the morning when you are running late and “don’t have time to pack your lunch.”  Since you will likely be less rushed the night before, than in the morning, you will have more time to actually prepare something for your lunch and not just throw some processed food in a bag when you’re running late in the morning.
2) Don’t pack your lunch on an empty stomach.  If you wait until after dinner when your satisfied and not hungry it will be easier to choose healthy foods for the following day’s lunch.
3) Make sure you can keep it cold.  If you are packing perishable food make sure you have adequate ice packs and an insulated cooler to keep your food below 40 degrees.  This is especially important if you have a long commute in the morning where your lunch will be out of refrigeration and/or you don’t have a refrigerator to keep it in once you get to work.
4) Plan ahead.  Buy items for a pre-planned weekly lunch menu ahead of time.  Consider what you will be eating for dinner that week and what you can use as leftovers in your lunch the next day.  Using leftovers will help reduce food waste at home and can save you even more money.
I hope that you are able to not only implement this small change but make it permanent.  To a healthy new year!

Vida Nutrition: Eat Your Juice:   This is week 1 of my weekly blog: 52 Weeks, 52 Ways to a NEW You! Make 1 small permanent change to your diet this week and reap H…

This is week 1 of my weekly blog: 52 Weeks, 52 Ways to a NEW You!
Make 1 small permanent change to your diet this week and reap HUGE benefits:

There really is no reason to drink fruit juice if you can just eat the real thing.  Eating the whole fruit provides for significantly less calories and more nutrition.  Take a look at the chart below.

At first glance you might notice that orange juice has more vitamin C than the fresh orange.  However, the juice is missing the skin and the pulp of the fruit.  Even if you drink OJ with pulp there is still far less than what’s in the whole fruit.  Edible fruit skins such as apples, plums, grapes, and strawberries, to name a few, are where much of the pigment of the fruit is.  These pigments, including carotenoids and flavonoids, are powerful antioxidants.  The pulp is also a rich source of fiber and phytonutrients (plant nutrients).
Now lets take a look at the calories.  81 calories vs 112 calories, seems insignificant right?  Think again, if you swapped the OJ for a fresh orange everyday for a year you would cut over 11,000 calories which would be a difference of more than 3 pounds of body weight per year.  Swap the grape juice at 152 calories for fresh fruit and see more than double the calorie deficit and weight loss.  Easy change, big result!

If you MUST have something sweet to drink try some of the following suggestions:

2) Cut the calories even more while ramping up your antioxicants and try my favorite SUPER drink!
3 parts iced green tea: 1 part 100% juice.  At ONLY about 30 calories per 8 oz serving it’s sure to pack in nutrition without packing onto your waste line.  Use dark colored juices that are packed with anti-oxidants such as blueberry, concord grape, blackberry, acai, or cranberry for the most benefit.  Though I’m not a huge fan of non-nutritive sweeteners (natural or artificial), if you need this concoction a little sweeter try adding a small amount of stevia (Truvia®) or sucralose (Splenda®).

As always, check back next week for more SMALL and EASY changes that will have a BIG impact on your health!